Animated Lighting just completed a lighting project with more than 72,000 lighting channels! We worked with VitalSigns Unlimited to animate a dynamic new sign for the Ameristar Casino Corporation’s location in Council Bluffs, Iowa.

In June 2013, Animated Lighting was approached by VitalSigns Unlimited in Council Bluffs about a concept they had proposed to the Ameristar Casino Corporation. This sign would include a video display and lighting on each of the vertical columns of the sign. This obviously is nothing dramatic and new. What was dramatic was the goal of RGB pixel lighting on all four sides of the top portion of the sign. The proposal included more than 24,000 RGB (Red, Green, Blue) pixels in the lettering and background of the sides of the top of the sign. Each of these pixels are individually controlled and can be any color of the rainbow. This would allow for an almost unlimited variety of lighting effects and colors for the top of the Ameristar sign.

During a series of meetings in June and July 2013, we assisted VitalSigns in formulating the hardware, software, and RGB pixel lighting to be proposed for the top of this sign.

Our control technology of multiple Monster Brain MBX units working as a distributed network with dozens of our 2000-channel Pixel Drivers would be able to support a lighting network of more than 72,000 lighting channels. We also had the ability to program the appropriate lighting effects and scenes for the sign. This programming and effects are saved to secure digital (SD) cards that are stored in the Monster Brain MBX units. The Brains send the commands to each of the Pixel Drivers, which control the colors and effects of the 24,000 RGB Pixels.

In early 2014, the approval was given to build this sign! Animated Lighting and Vital Signs set in motion the plans to get this monstrous project moving forward. Final wiring plans were determined as well as lighting channel counts, etc. At long last the work began!

Here are some pictures showing various parts of the building of the top of the sign and examples of the work that was performed: 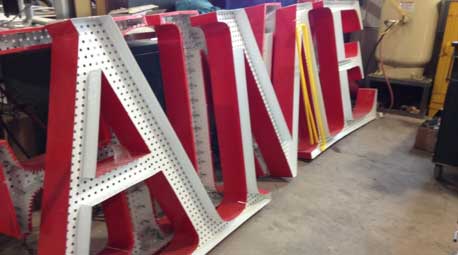 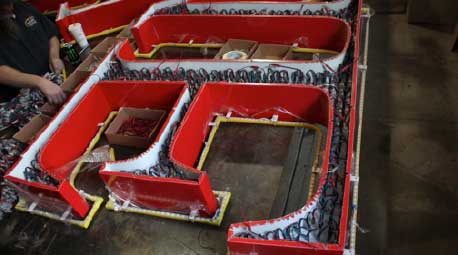 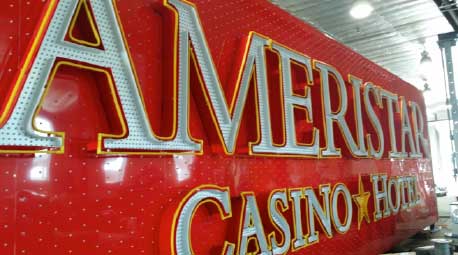 One face of the sign with the RGB pixels mounted both in the lettering and on the background. 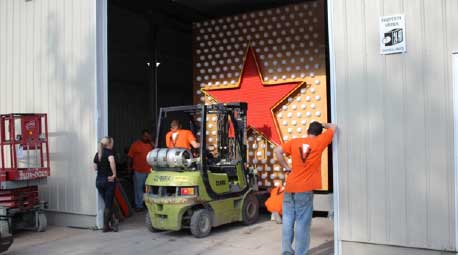 One of the end panels on the sign being prepared to be installed. 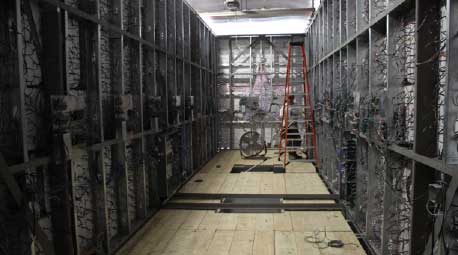 An inside view of the sign after wiring was completed with just the roof and floor to be finished before being ready to install. 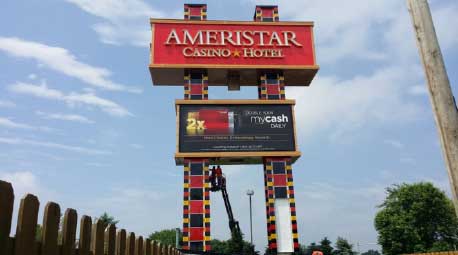 The final installation (more than 70 ft tall). Animated Lighting controls all four sections at the top of the sign and lighting channels on the vertical poles (red and yellow squares). 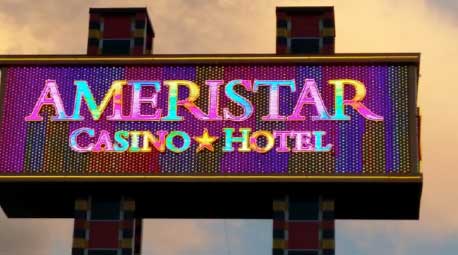 Initial testing of the RGB capabilities of the lighting channels on the face of the sign.

Animated Lighting provided installation services for the RGB Pixel strings in the sign. We provided all the controllers for the top portion of the sign as well as networking, programming and testing services.

As part of our support to both Vital Signs and Ameristar, we provided a document that showed information about the wiring, networking, controls, etc. A Troubleshooting section was also included showing how to identify and fix potential problems with the operation of the sign.

We are very proud of how the sign turned out so of course we have a video to show you. Notice not only the standard lighting effects but also lighting effects for the sign that can be used for various special events or promotions. This is very exciting and should attract a lot of attention and interest for the casino.

Want to know more about this project? Please don’t hesitate to contact us.

Other Articles in This Series