The design staff started in January coming up with new ideas to take their haunted evenings in the park to the next level. Someone threw out the idea of some sort of computer controlled pumpkin. Soon it turned into a forest of pumpkins and the events staff was given the task to make it happen.

More than 400 foam pumpkins were cast in various shapes. They were hollow and could be carved much like a real pumpkin. The artists went to work and soon a wide array of faces were created. Each pumpkin then had an 11 watt orange light inserted and they were ready to build the full display.

A section of the park was picked where the tree canopy covered the main walkway. Pumpkins were carefully tied to the tree limbs and the electrical wires bundled to run down the trunk. The pumpkins were also scattered on the grass, in planters and even on the outdoor rated speakers.

Pumpkins were grouped electrically and connected to Animated Lighting DMX based light controllers. 12 gauge outdoor rated wire was used to make all the pumpkin electrical connections so there was no chance of overloading an extension cord when used for other special events.

The DMX control cables were routed to light controllers on each side of the path and connected to wireless DMX receivers with antennas aimed at the master control booth several hundred yards away behind the facade of one of the buildings. A lighting designer used High End System's Hog 3PC software running on a standard laptop PC connected to a DMX widget and the wireless DMX transmitter. A light show was quickly designed to randomly flicker the lights in the pumpkins and then it was synchronized to a scary sound track. Every few minutes, the sound track would play a gush of wind and all the flickering pumpkin lights would appear to blow out putting the area in total darkness. 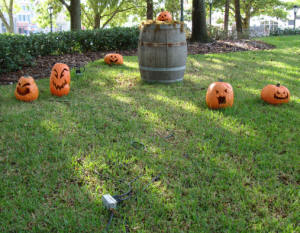 Pumpkins are randomly scattered on the ground. Look carefully at the junction box at the bottom of the picture where all the 11 watt light bulbs are connected to Animated Lighting DMX based lighting controllers. 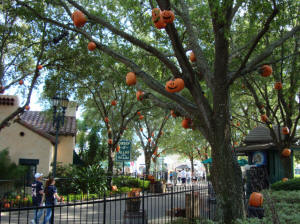 Here are just a few of the 400 pumpkins during the day, many hanging from the trees. 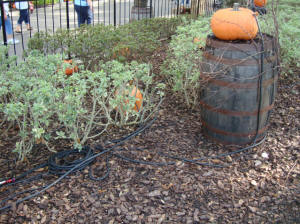 Anything that could hold a pumpkin held a pumpkin. Notice all the 12 gauge extension cords in the picture.

Notice the bundle of cable going up the tree trunk to power the pumpkins hanging from the branches. 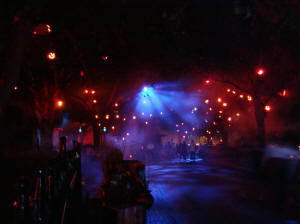 Here is a view of many of the pumpkins at night. Ellipsoidal lights with blue gels were also used to cast shadows on the ground. 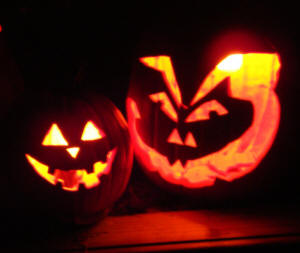 A couple of foam carved pumpkins reveal the 11 watt orange lights inside. 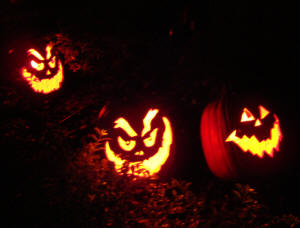 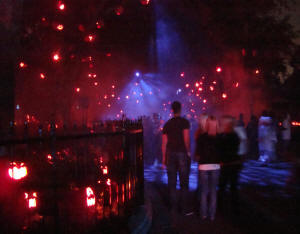 People walking through the pumpkin forest were also greeted by ghoulish characters who roamed the streets.