The University of Phoenix Stadium in Glendale, AZ, and Flouresco Lighting contacted Animated Lighting to ask how they could successfully control two 190 foot high columns they were building.

Each column consists of 115 red eight foot long LED bars called "audio thermometers". They wanted these thermometers to have a series of lighting effects, one of which would simulate the change in crowd noise within the stadium.

Beginning with the initial layout from Fluoresco, Animated Lighting provided the control of the "Audio Thermometers". The pictures below show some of these bars bundled together for testing and the magical hand simulating the slider controls of the final installation.

Beginning with the initial layout from Fluoresco, Animated Lighting provided the control of the "Audio Thermometers". 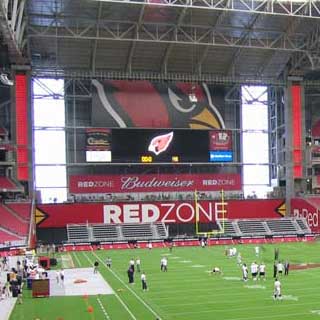 Animated Lighting's Light Show In A Box (LSIAB) system controlled DMX dimmer packs mounted in the raceway behind the columns. Each of the DMX boards controlled up to 32 DMX channels. This required the output of each DMX boards to be connected to no more than eight of the four channel DMX dimmer packs being built for the system.

Each column of this gigantic stereo thermometer is controlled by moving a slider up or down located in the stadium control room. There are also seven buttons on a keypad that can run the columns through any of several pre-programmed patterns to entertain the audience. The patterns can be overridden by simply moving a slider, hitting a bump button, or pressing another key on the keypad.

U of Phoenix Stadium