Schlitterbahn's Hill Country Christmas in New Braunfels, Texas (close to San Antonio) shuts down their award winning water park in the fall and starts preparing for Christmas. They create a dazzling award winning walk-through display bringing in people from all over Texas.

Anybody can put up millions of Christmas lights but Schlitterbahn wanted to have some of their displays choreographed to music. They quickly called Animated Lighting.

Schlitterbahn took one of their pools, drained the water and built scaffolding to hold some Christmas trees. The staff called it the wedding cake because that's what the scaffolding looked like without the trees. Soon enough 19 six foot tall trees were added, each with two colors of lights and a giant Christmas tree was formed. They added 18 huge snowflakes, various ornaments and named it Holiday Illuminations. Animated Lighting called it the display needing 63 light channels sequenced to five different Christmas songs.

Once the tree was built and everything working, mini-lights were strung from the base of the wedding cake to the sides of the pool to imitate water glisten in the night. Holiday Illuminations ended up being one of the favorite destinations in the park. 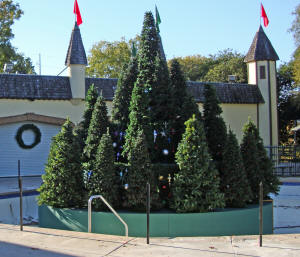 The Holiday Illuminations set. The pool was drained of water and a wooden structure built to hold 19 six foot tall trees on four different levels. Without the trees the staff thought it looked like a wedding cake and the name stuck for internal use. 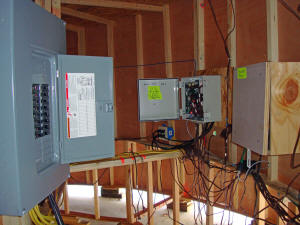 Inside the wedding cake at the base level. The pool concrete can be seen at the bottom of the picture. The main power distribution panel is on the left, an Animated ELD-16 is in the center and the wooden box on the right houses the Monster Brain to control the display. 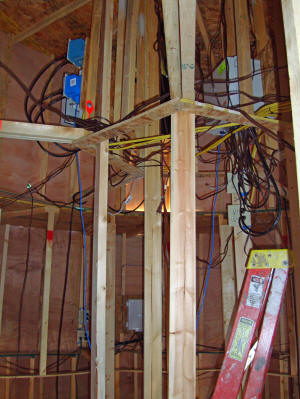 Inside the wedding cake everything is very three dimensional requiring a ladder to get to the various Animated Lighting controllers. Look carefully for two controllers at the top and one near the bottom of the picture on the back wall. 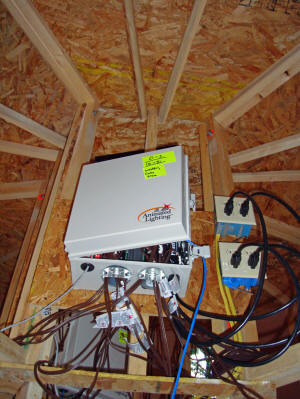 A close-up view of one of the controllers connected to trees at the top of the Holiday Illuminations display.